To borrow my favorite investing analogy from Bobby Axelrod on Billions, crypto is a pig on LSD — you never know what direction it’s going in next.

To illustrate, nobody could have accurately predicted that Bitcoin would suddenly crash 71% in just a few short weeks, bringing other cryptos with it and wiping $2 trillion off the industry’s total market cap in 2022.

For all we know, crypto could rally — or capitulate — by 2023. And what about stablecoins? The metaverse? And how will all this talk of regulation pan out?

Having written about crypto for years — and consulted colleagues on the Blockchain Chamber of Commerce — here are five of my predictions for the future of crypto.

After a Dead Cat Bounce, Bitcoin Will Die by 2024

Things are not looking good for the King of Cryptos in 2022:

As a result of Bitcoin’s PR woes and a mass exodus of pandemic-era investors, prices are down 71% in 2022.

Except for El Salvadoran President Nayib Bukele, Bitcoin’s list of allies grows perilously thin in 2022. And for a 100% speculative asset — whose value rides on popularity alone — that may spell doom for the aging crypto.

There is some hope that the Lightning Network will breathe new life into Bitcoin by speeding up transaction speeds and lowering fees. But a simple tech upgrade won’t address the more significant issues above.

I predict we’ll see a dead cat bounce by mid-2023. That may give some investors hope, but to larger investors, it’ll present an opportunity to finally liquidate their BTC holdings, ensuring Bitcoin never rises above $10k again.

All things considered, I think we’ll see the following headline sometime in 2024:

So what’ll happen when Bitcoin vacates the throne?

We saw early evidence of this when China outright banned Bitcoin in 2013 and then immediately began developing a central bank digital currency (CBDC) of its own: the digital yuan.

In other words, even the world’s biggest Bitcoin haters — the People’s Bank of China — had to admit that the concept was pretty cool (and worth copying).

So cryptocurrency isn’t going anywhere. But who will take the throne after Bitcoin if the kingdom outlives the king?

But in the end, unlike most succession battles, the transition to “the next Bitcoin” will be peaceful.

That’s because every viable candidate for the throne uses proof of stake, which is ~99% more eco-friendly than proof of work. And when crypto’s environmental impact drops by several magnitudes – and the process of “mining” becomes more democratized — it’ll usher in a new Renaissance of crypto adoption by retail traders and governments alike.

Regs Are Finally Coming – And Biden Will Appoint the SEC, Not the CFTC, for One Simple Reason

Now that consumers have lost more than $1 billion to crypto scams and crypto accounts for one in four dollars lost to fraud worldwide, there’s no question that stricter regulations are coming.

Only one question remains: by whom?

As of September 2022, there’s a tug of war going on between the U.S. Securities and Exchange Commission (SEC) and the Commodity Futures Trading Commission (CFTC) over who should regulate the crypto industry.

At the risk of oversimplifying the discussions, here’s the gist: The SEC claims that cryptos are securities and therefore fall under their jurisdiction. The CFTC, on the other hand, views them as currencies and, therefore, their purview.

Interestingly, both agencies have gone after Coinbase on separate charges. In March 2021, the CFTC fined the exchange $6.5 million for wash trading, and in 2022, the SEC opened an investigation into fraud after they played host to crypto’s first-ever insider trading case.

Even still, Coinbase would clearly prefer being policed by the CFTC since the SEC’s “enforcement-first approach” has “stifled development of the crypto securities market and prevents entrepreneurs from using crypto to raise money for their companies.”

But Coinbase’s beef with the SEC won’t change the fact that they’re clearly Biden’s frontrunner to regulate the industry: not only because the SEC is better-equipped to fight fraud, but because Coinbase’s “they’re just currencies” defense is getting weaker.

When, not if the new sheriff arrives in town, we’ll likely start seeing exchanges having to register as broker-dealers. And ICOs will have to jump through regulatory hoops. It’ll slow down the industry’s growth, sure, but it’ll bring law and order — and hopefully prevent another $1 billion in fraud.

Since 2019, Meta (fka Facebook) has invested over $21 billion in the metaverse — the virtual reality-based sequel to the internet. And so far, all it’s delivered is some dank memes and concerning callbacks to Black Mirror:

The general public doesn’t seem all that excited for the metaverse. Especially after early testers like WSJ’s Joanna Stern report nausea, disorientation, and even gender harassment.

But while the metaverse may end up the world’s most expensive tech flop, I predict that good will come out of it.

Namely, that the metaverse will help accelerate stablecoin adoption on a global scale.

If Zuckerberg can deliver on his promise of a seamless, blockchain-powered payment solution for the metaverse — one that people trust just as much as fiat — that would have magnitudes more world-changing consequences than virtual reality poker.

For example, the emergence of a true global currency could help address one of the United Nations’ lesser-known Sustainable Development Goals: the lowering of remittance fees for sending money overseas, which currently stands at a painful 6.5% and inhibits income growth of developing nations.

Will the central banks of world superpowers allow for such a globalized currency to exist? Certainly not all of them. If the People’s Bank of China had their way, everyone would use the digital yuan.

But government resistance has never stopped the tech giants from trying before. With so much data on the line, it certainly won’t stop them now.

Years 2009 through 2020 were like crypto’s own Age of Discovery: an era defined by exploration, not conflict.

That’s because there's still so much ground to cover on this mysterious new “blockchain” that starting wars makes little sense. It's more productive for explorers to find the outer limits of the blockchain than to pick fights over existing territory.

But with stablecoins, all that changes. By definition, stablecoins are fighting over the same territory because they all have the same purpose.

And sometimes it can get vicious. Just take this poorly-aged Tweet by Terra Luna founder Do Kwan, sharing some less-than-encouraging words for competing stablecoin $DAI. 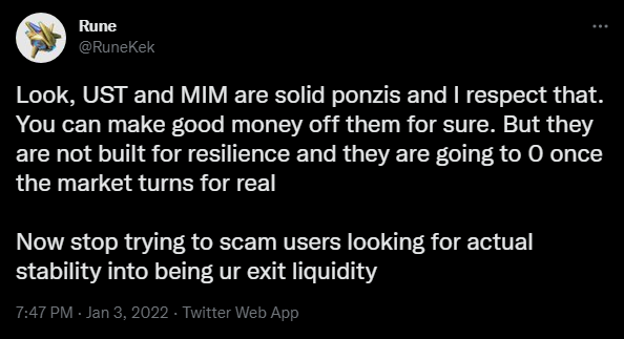 Now, imagine this level of conflict between Meta, Microsoft, and Google.

Sure, executives at these companies may know better than to voice their true feelings in a public forum (especially since they have PR divisions to advise them otherwise), but the level of intense competition will remain the same — only on a 1,000x scale.

Like Europe circa 1913, we’re already witnessing the arms race. Meta is developing paxos (USPD), Microsoft has received a U.S. patent for a “crypto token creation service,” and Apple has allocated an unknown portion of its $25 billion annual R&D budget to researching tokens for the metaverse.

In other words, the Great Stablecoin War is about to begin.

But it won’t be as bad as WWI. Because when tech giants compete, we all tend to benefit. We might see huge signup bonuses thrown our way, more secure forms of payment, even cash back incentives via credit cards. It could also lower remittance fees for newly-immigrated Americans sending money back home.

And on a global scale, if an American tech giant conceives of the world’s first mass-market stablecoin, it could solidify the USD as the world’s primary reserve currency for another 500 years.

With crypto, the only constant is change. Having read all of the predictions above, you might be left wondering: should I buy? Or bail out before it’s too late? Only you can decide.

Whatever you choose, make sure you do your research before you invest, assess your risk tolerance, and make sure that you only invest what you can afford to lose.

Investigate crypto for yourself: 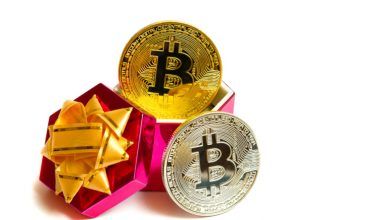