Anti-tank hedgehogs, AK-74 assault rifles, and NFTs such as CryptoPunks: Believe it or not, all three of these things now play a key role in the defense of Ukraine.

On March 1st, 2022, an anonymous donor transferred CryptoPunk #5364 to the Ukrainian government’s crypto wallet. At the time of transfer, the donation was worth around $233,000. Since then, the crypto donations have been pouring in.

So, how has the massive influx of crypto donations impacted Ukraine’s defense? And why is the country launching an NFT amidst the chaos?

Let’s dive into Ukraine’s new NFTs, and the role of crypto in the ongoing conflict.

Crypto’s Surprisingly Major Role in the Defense of Ukraine

When Russia invaded Ukraine on February 24th, 2022 the Ukrainian government immediately declared martial law. In tandem with that action, the National Bank of Ukraine suspended all digital money transfers indefinitely. In terms of banking activity, the most your average Ukrainian could do was withdraw up to approximately $3,300 worth of cash.

Why did Ukraine do this? They wanted to prevent a bank run, which is where too many people cash out at once leading to a default of the central bank. You know, like what’s currently happening in Russia.

Anyways, when Ukraine (understandably) froze up its economy, it created challenges for people who wanted to donate to the heroic defense from overseas. Traditional fiat channels like wire transfers or PayPal were delayed, blocked, or, even worse, were at risk of being intercepted.

With fiat money stalled, cryptocurrency came to the rescue.

Thanks to the genius way Satoshi Nakamoto’s designed the OG blockchain, cryptocurrency transfers cannot be controlled, manipulated, or seized. A transfer from your wallet to Ukraine’s would simply float right over any sanctions or international boundaries like a hovercraft over a minefield.

Realizing this, just 36 hours into the invasion, the Ukrainian government tweeted their public keys to the world and allowed crypto transfers to flow in. 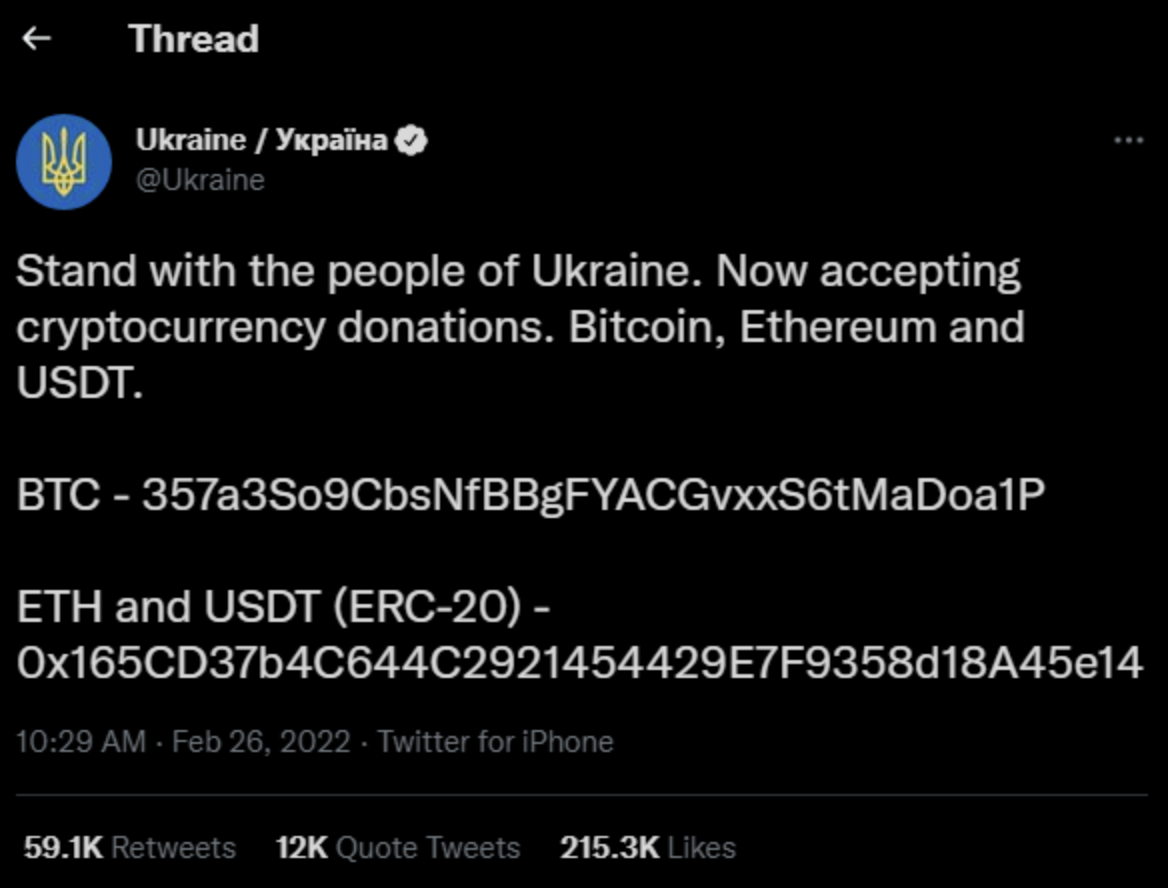 Within a week, they received $53.7 million worth of Bitcoin, Ethereum, and other various altcoins from more than 102,000 mostly-anonymous benefactors around the world.

Worth a special shoutout is Polkadot founder Gavin Wood, who personally donated $5.8 million worth of PDOT to Ukraine’s cause. Coincidentally, the amount of crypto they received in total nearly matched, dollar-for-dollar, the $54 million coming from USAID.

So, how is Ukraine spending its crypto?

Kyiv-based crypto exchange Kuna.io has been helping the government receive and convert its crypto into vital supplies.

“We obviously can’t buy nuclear bombs or rockets,” said Kuna.io’s chief executive, Michael Chobanian, to The Washington Post. But “most nonlethal things you can buy with crypto.”

So far, Ukraine has used crypto to purchase drones, kevlar vests, night vision goggles, gasoline, medical equipment, and more. But as the Russian advance continues, more life-saving supplies like these will inevitably be needed.

Therefore, to drum up additional support, the government of Ukraine has decided to further leverage the digital asset economy.

They’re about to become the first country to release an NFT.

Ukraine is Canceling an Airdrop in Favor of NFTs

Initially, the government of Ukraine had planned an airdrop as a way of thanking their existing donors and drawing in additional fundraising. 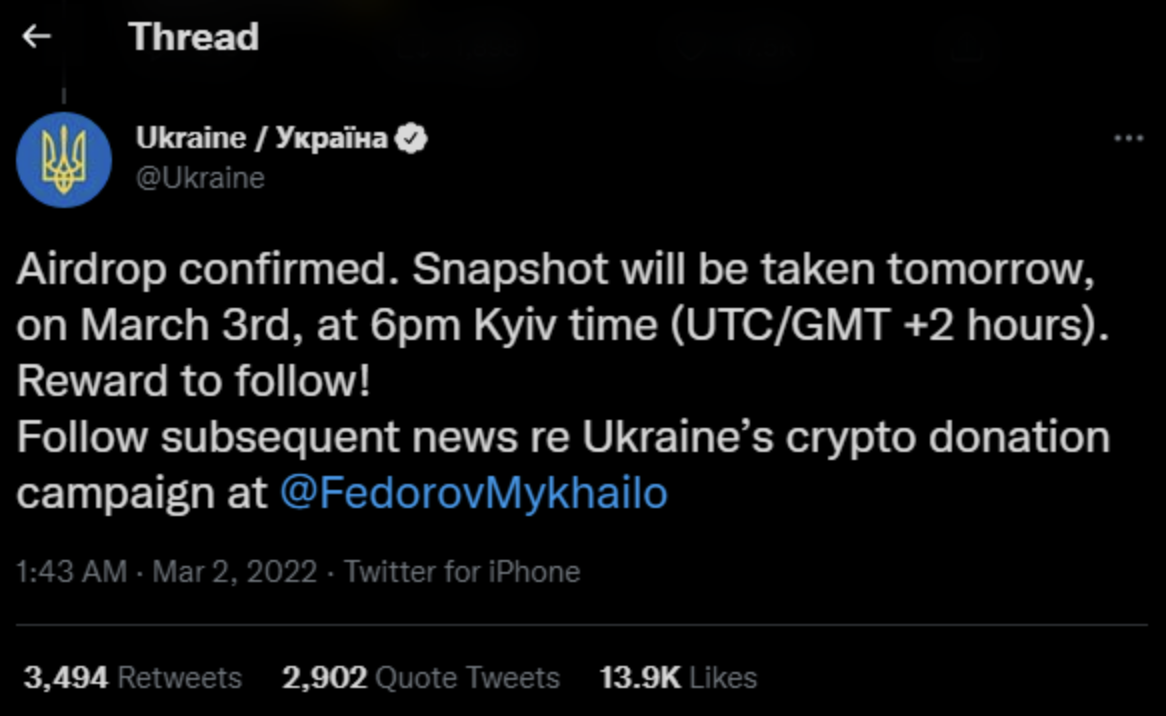 For the uninitiated, an airdrop occurs when businesses or entities send out free crypto or NFTs as a thank you to the community and/or to drum up publicity.

While well-intentioned, Ukraine’s proposed airdrop raised concerns among their donors, who felt that an airdrop simply wasn’t necessary. They take effort, planning, and resources. Pretty much everyone agreed that Ukraine should be spending 100% of the donations on themselves.

Thankfully, Ukraine came to that conclusion, too.

In a tweet on March 3rd, Ukraine’s Vice Prime Minister and Minister of Digital Transformation, Mykhailo Fedorov, announced that the airdrop was canceled and that Ukraine had no plans to mint a fungible token for distribution. 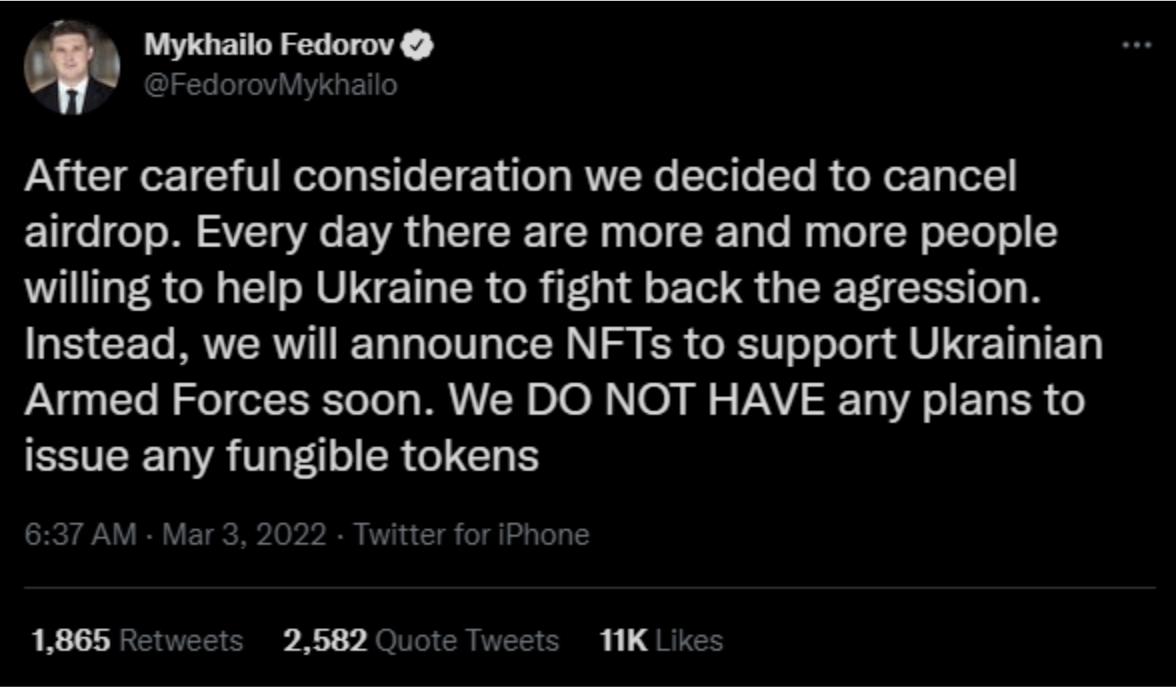 Non-fungibles, however, were on their way.

So what will Ukraine’s NFTs look like? When will they arrive, and at what cost?

Considering the speedy (yet efficient) pace at which the Ukrainian government has been operating, I predict that we’ll see NFTs released in the next week or so — if they haven’t already by the time you read this.

I pray that they release the NFTs at auction — not for a flat fee — because the international community will end up bidding much higher than any price they can come up with.

Case in point, the autonomous collective Ukraine DAO recently sold an NFT of the Ukrainian flag for $6.75 million worth of ETH. One hundred percent of the proceeds went to relieve the suffering of Ukrainian citizens, according to Ukrainedao.love.

Now, although crypto has come to the rescue of Ukraine by providing tens of millions worth of direct aid, it’s worth reiterating that crypto is decentralized. It doesn’t pick sides, and therefore, can be used by Russia as well.

Which begs the question: How is Russia using (or abusing) crypto during all this?

Is Russia Using Crypto as Well?

While Ukraine is using crypto to airlift aid over its own waterlogged economy, Russia is reportedly trying to use it to circumvent Western sanctions.

“Ukrainian officials have asked crypto exchanges to freeze all Russian accounts. The companies agreed to enforce a blacklist,” writes Bobby Allyn for NPR. “But they are refusing to ban all Russian accounts, saying that would undermine the crypto community's libertarian ethos.”

Blocking the Kremlin while still allowing everyday Russians to trade crypto might be the right move, since it minimizes the collateral damage to civilian bank accounts.

After all, economic sanctions are the modern equivalent of siege warfare. And just like rows of trebuchets, sanctions tend to hurt more civilians caught out in the open than elites hiding in their castles.

If I can afford one, a Ukrainian NFT may become my first-ever NFT purchase. Because to me, these NFTs embody the spirit of decentralized finance more than any single digital asset that preceded them:

That being said, for Ukraine's sake I still hope they sell for way, way out of my price range. (At which point I’ll continue to donate to the cause by other means).

At the same time, I hope that the nations of the world and the crypto marketplaces can come together to refine a high-tech solution to replace traditional economic siege warfare — one that allows everyday people like you and me to continue trading crypto.

Most of all, I hope that in a few days or weeks, I can write a follow-up story about how crypto helped to save Ukraine.

Chris helps young people prosper - both mentally and financially. In addition to publishing personal finance advice for Investor Junkie and Money Under 30, Chris speaks on the topics of positive psychology and leadership through CAMPUSPEAK and sits on the advisory board of the Blockchain Chamber of Commerce.
Editor’s Note
You can trust the integrity of our balanced, independent financial advice. We may, however, receive compensation from the issuers of some products mentioned in this article. Opinions are the author's alone, and this content has not been provided by, reviewed, approved or endorsed by any advertiser.
Our Guides
Table of Contents
Facebook Twitter WhatsApp Telegram
Back to top button
Close
Close