When there's instability in the economy and financial markets, precious metals often function as the ultimate alternative investments — prospering when other investments become unstable and decline.

So with inflation at a record high in 2022 and stocks still trying to climb out of a bear market, you may be wondering if it would be a good time to invest in silver.

In this guide, we'll break down if and when silver is a good investment. We'll also break down a few of the best ways to invest in silver today.

The Basics of Silver Investing

Silver isn't a traditional investment since it doesn't generate a product or service. Silver has value in and of itself, as both a precious and an industrial metal. But it's otherwise inert. It doesn't produce anything, generates cash flow, or provide a steady income.

Silver is more in the realm of speculation than investment. If you choose to invest in silver, you should approach it with the mindset of a speculator.

That can be not easy to discern, especially when the price of silver seems to be rocketing to infinity. Most times and in most markets, silver goes flat, trading in a very tight price range.

Is Silver a Good Investment?

We answer this question by looking at the history of the price of silver. Throughout the centuries, silver wasn't an investment at all. People used silver as actual money. People used it in everyday transactions, while gold was primarily held and used by the wealthy. Some people refer to silver as “the poor man's gold.” And because it was a monetary metal, its value remained relatively stable.

Until the 1960s, the price of silver stayed below $1 per ounce. That was one of the basic reasons the U.S. government commonly minted silver coins. However, as silver began to rise in price, the U.S. government withdrew silver from American coinage under the Coinage Act of 1965.

After being demonetized, silver rose in price. As the price increase became more intense, it began to take on the characteristics of an investment.

Ironically, silver regained that price level only 39 years later and again could not sustain it for long. Through the years, silver experiences periodic and dramatic increases that maintain its reputation as an investment.

More than anything, however, silver seems to be a commodity that either performs spectacularly or languishes and does nothing.

The price of silver languished at around $5 per ounce from 1995 through the end of 2003. If you had held silver during that eight-year time frame, you would have had virtually no return on your money.

Then it began the second major upturn in price that confirmed silver as a legitimate crisis investment. From a price level of less than $9 in late 2008, it reached nearly $50 per ounce in 2011. That's a return of more than 500% in the space of less than three years.

Since then, the price has slowly retreated throughout 2021 and 2022. As of writing, silver's price per ounce is nearing the $20 mark. 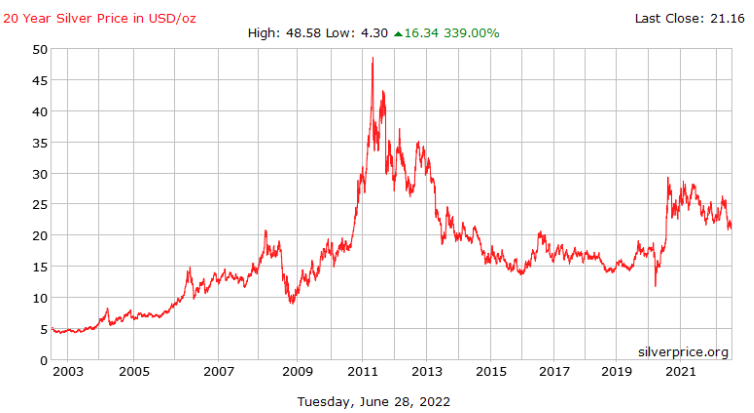 Based on price action, it seems that there's a time to be in silver and a time to be out — which is most of the time. 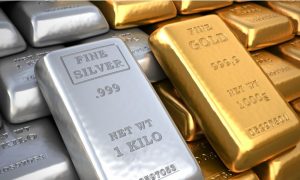 Gold and silver are often used interchangeably since they have similar histories and price performance. Generally speaking, the prices of the two rise and fall in tandem. For that reason, it may not matter which you hold during a time of financial turbulence.

Traditionally, gold has been considered the more common investment metal, probably since it's still considered to be something of a monetary asset. After all, the major central banks of the world all hold substantial reserves of gold.

In recent decades, silver has become more of an industrial metal than a monetary one. The gold/silver ratio has traditionally been between 50-to-1 and 80-to-1 but grew to nearly 115-to-1 in early 2020.

Further Reading: The Case for Silver vs Gold

How to Invest in Silver

There are multiple ways you can invest in silver. This includes purchasing the metal itself and taking possession of it. Or investing in paper assets connected to silver, such as stocks, funds, and even silver streaming companies.

If you're not keen to own silver bullion itself, you can own the metal through paper assets tied to it.

Silver mutual funds invest primarily in the stock of companies that mine silver. It's not the equivalent of owning the metal itself, but rather participating in the industry that produces it. A silver mutual fund holds a portfolio of stocks in such companies. Those stocks generally parallel silver price levels. You can buy silver mutual funds through most stock brokers, like Merrill Edge.

A silver exchange-traded fund (ETF) is a way to hold silver bullion itself, except you do it through a fund. An example is the iShares Silver Trust (SLV). This fund generally traces the price of silver, largely because it holds the metal in the trust. You won't have direct ownership of the metal itself. Instead, you own shares of the ETF that owns the silver. You can purchase ETFs through most online brokers, including Ally Invest.

Exchange-traded notes (ETNs) are unsecured debt securities that track an underlying silver index. Unlike bonds, they don't pay interest. Instead, the price of the ETN fluctuates with the value of silver. ETNs trade on major exchanges, much like stocks. Since ETNs don't hold silver or even stock in silver mining companies, investing in securities is best for those more experienced in silver investing.

This is the most direct way to invest in silver. By buying silver bullion, you actually take possession of the metal, even holding it “old school” in coin form.

Be careful when buying silver coins! Many coin dealers will attempt to persuade you to buy numismatic silver coins, which are a different commodity entirely. While silver bullion coins are playing on the price of silver itself, numismatic coins get their value primarily from the rarity.

For example, many U.S. silver coins from the 1800s command prices in excess of $1,000, which is nearly 40 times its silver content value. That's something closer to investing in the artwork than it is in silver itself.

Complicating numismatics is the fact that there is significant disagreement over the grading and value of each coin. One dealer values a coin at $1,000 while another determines it to be worth only $750. Numismatic coins are suited only to those who are experts in that field.

Another way to invest in silver is to purchase stock in the companies that mine it. Instead of purchasing a portfolio of stocks through a mutual fund, you are buying them individually.

Silver streaming companies are like buying royalties in silver mining companies. These companies are not actually involved in silver mining directly. Instead, they provide financing to the companies that do. They'll be paid back, often by being able to buy silver from their mining partners at well below the going rate. That allows them to sell the discounted silver at a full market price and collect the difference as a profit.

Pros and Cons of Investing in Silver and Other Precious Metals

Investing in Silver Can Be Challenging

Silver is unquestionably one of the more difficult commodities to invest in. It's hard to know when to buy and when to sell. Most important, silver isn't the kind of investment that provides reliable capital appreciation or even income like interest or dividends.

If you do choose to invest in silver, the best way is probably through a silver ETF. This allows you to participate in the metal itself with low fees and the ability to buy in and sell out quickly, and can easily be managed by low-fees brokers like E*TRADE. But you won't need to be concerned with taking possession of the metal or dealing with the uncertainties of silver mining stocks.

No matter what, keep your investment in silver at a low single-digit percentage of your total portfolio. A 5% position may be enough to give you impressive returns during a financial meltdown, without crushing your portfolio if the price goes against you.

Read about what else you can invest in>>