Even in the world of index funds, where the stakes are massively lowered by inherent diversity, there’s debate as to which fund will be the more lucrative long term play.

Two that are commonly pitted against each other are QQQ and SPY. Both mega-popular ETFs have been around for decades, share much of their DNA, and have helped countless thousands retire early with their double-digit annualized returns.

But which is better going into 2023? Will a bearish outlook drain the share prices of one before the other? Is one better to buy during the “dip”? And how should the uncertain future for Big Tech affect where your money goes?

Let’s compare QQQ and SPY to find out which fund is right for you.

What are QQQ and SPY?

QQQ and SPY are index funds that track the NASDAQ 100 and the S&P 500, respectively.

And while that may make the pair sound totally divergent, they actually share the majority of their holdings and mimic each other's performance. Hence the plethora of head-to-head comparisons and debates on r/Investing over which is inherently “better.”

I won’t pick a side, of course, but there’s data to suggest that one of the two may be objectively better for you. Let’s find out which.

An Intro to QQQ

The Invesco QQQ Trust tracks the NASDAQ 100 Index, meaning it includes the 100 largest non-financial companies listed on the Nasdaq based on market cap.

But that’s just the dry, technical description. To Invesco, their breakthrough ETF provides exposure to some of today’s most innovative companies in a single click.

The firm also isn’t shy about their prized ETFs historical performance. Since inception in 1999, QQQ has smashed the overall performance of the Russell 1000 and the S&P 500 – even during the dotcom bubble and the ‘08 chaos.

Does that mean it’s the clear winner over SPY, which tracks the latter?

Before we dive into the head-to-head, let’s take a closer look at QQQ’s holdings and sector exposure. There’s a lot to like, sure, but also a few eyebrow-raisers going into 2023.

If you’re new to QQQ, you’ve probably just noticed it’s most (in)famous quirk – it’s heavy weighting towards Apple and Microsoft. The two alone comprise nearly a quarter of the entire ETF, despite QQQ aiming to capture the performance of an entire index.

That’s not inherently good or bad, but it certainly gives QQQ some personality and results in bouncider daily performance when Apple and Microsoft hit the headlines. More on that in a bit.

QQQ is tech heavy. Where SPY dips its toes, QQQ dunks its head.

Tech titans Tesla, Amazon, Google, Microsoft, and Apple make up a whopping 40% of the entire portfolio by their lonesome. In total, 65.44% of QQQ’s holdings fall into the IT or Communications sectors, while Health Care and Industrials fall into the single digits.

Behind IT and Communications, the third biggest allocation goes to Consumer Discretionary. Not to be mistaken for Consumer Staples – which also make an appearance at half the weight – Consumer Discretionary stocks tend to rise in a healthy economy and fall in a bleak one. Case in point, they’re down roughly 30% YTD in 2022.

It all positions QQQ to ride the wave of the overall economy, rather than provide a Recession-proof hedge. But before I get ahead of myself, let’s look at SPY and see which one’s the better buy.

An Intro to SPY

The SPDR S&P 500 ETF Trust, James Bond’s favorite ETF, tracks the S&P 500. To many, it holds the title of the world’s first ever exchange-traded fund, launching all the way back in January 1993 (Canadians might argue the Toronto 35 Index Participation Units beat them to the punch in ‘90).

While SPY’s origins are debatable, one fact remains irrefutable; SPY remains the largest and most-traded ETF in the world. With $376 billion in assets, SPY dwarfs its rival QQQ’s “mere” $162 billion, and is also traded at a 50% higher frequency.

Unlike James Bond, SPY’s primary appeal comes from its diversity. The ETF’s top 10 holdings comprise just 26.41% of its total portfolio, and the ETF dips into 24 industries – far more than QQQ.

So let’s pick apart the details and see why the 30-year-old ETF remains so dominant.

SPY’s top 10 holdings highlight its chief value proposition: diversity. Sure, Apple and Microsoft still take the cake, but the two titans’ combined weight represents just 12.42% of the overall portfolio – roughly half their share in QQQ.

You’ll also see more sector diversity in the top 10. Energy and Healthcare make an appearance, as does Berkshire Hathaway, which itself represents interests in Insurance, Entertainment, Finance, and more.

At the risk of overusing the “d” word, SPY remains one of the most diverse ETFs on the market. IT and Communications together represent roughly a third of the portfolio, while Financials, Consumer Staples and Discretionary, Energy, Materials, Utilities, even Real Estate make an appearance. 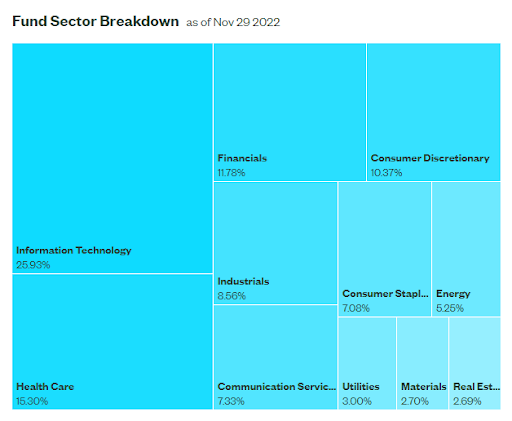 It all lends to a boring-but-stable 10% historical annualized returns. And depending on the type of investor you are, that might be all you need.

But now that we have a basic understanding of QQQ and SPY, let’s pit them head-to-head to find out which is right for you.

While QQQ and SPY share a majority of their holdings, the former’s tech-focus has led to more erratic performance in both directions, but higher returns overall.

Looking at the past five years, we can see how QQQ recovered much more quickly from the pandemic than SPY, which better represents the overall market. But at the same time, QQQ also fell harder as the Fed raised interest rates.

Some would say this presents a prime opportunity to “buy the dip,” and grip tightly onto QQQ before it takes off again. Granted, the tech-heavy ETF always has recovered – in spectacular fashion, no less – so taking a chance on QQQ over the “boring” SPY would seem like a smart play with higher expected returns.

But I’m not so sure.

See, QQQ’s philosophy seems to be “Big Tech always goes up,” and historically, that’s been true. But in 2022, a string of scandals and erratic CEO behavior have led to Big Tech blue chips tumbling 50% to 70% YOY. Zuckerberg’s flailing metaverse investment, Musk’s vexing takeover of Twitter, and Carvana’s ignominious death spiral have led speculators to wonder:

Is the Big Tech renaissance over?

It’s a question you’ll want to ruminate on before investing heavily in QQQ, since a bet on one is a bet on the other.

SPY has Half the Expense Ratio

In the grand scheme, an expense ratio of 0.20% vs 0.10% won’t make a massive dent in your bottom line. But I know some investors who are sticklers for lower MERs (management expense ratio) in their passively-managed ETFs, and I don’t blame them, so I thought it was worth reiterating.

With 12.68% historical annualized returns since 2012 and relatively steady performance, SPY is unquestionably the more “boring” investment of the two.

By contrast, QQQ has produced 16.77% historical annualized returns over the same period, with more extreme peaks and troughs in between. In theory, a well-timed buy of QQQ could produce much higher returns.

But again, that’s assuming the Big Tech blue chips make a healthy rebound. It may take a while, especially as we’re facing down a bleak 2023.

Furthermore, SPY’s largest sector allocation comes in at “just” 25.93% in Technology. Healthcare, Financials, Consumer Discretionary, and Utilities all make up the top five. QQQ may tout itself as “more than just a tech fund,” but the numbers say “barely.” IT and Communications make up 65.44%, while Healthcare comes in at just 7.62%.

Both QQQ and SPY are Viable Long Term Holds

While the data may present SPY as safer and more Recession-proof, both ETFs are viable long-term holds. After all, not everyone is so pessimistic about Big Tech; many still believe it’ll recover just as soon as the current CEOs end their shopping sprees and adjust to new trade regulations.

If tech takes off again, you’ll be glad to have QQQ in your portfolio. Hindsight is 20|20, and we may very well look back at the FY 2023 slump as the dip we’re glad we bought.

Which fund makes sense for you?

Within the context of the greater market, QQQ is a risky buy. Unlike SPY, it requires more faith in the resurgence of Big Tech and offers little else to buoy share prices during a Recession (Consumer Discretionary also tumbles during a bleak market).

But within the context of Big Tech, it’s a much safer buy than, say, handpicking 10 blue chips and calling it a day. Not only is it more convenient, it’s also cushioned – at least a bit – by multi-sector exposure. So if you’re already bullish on Big Tech coming back by 2024, it’s a strong buy.

SPY Is Better for Everyone Else

On the flip side, if you’re less bullish on Big Tech and simply seeking a good inflation hedge, SPY is a better bet. Sometimes “boring” is good. Heck, SPY may even rally past QQQ, given its exposure to growth sectors like Energy and Infrastructure.

At the risk of oversimplifying, QQQ is a better way to invest in tech while SPY is better for investing in the market as a whole.

The Bottom Line: Why Not Both?

If you’re still struggling to choose, there’s nothing wrong with buying shares of both QQQ and SPY. After all, the best soups combine the right amount of spice to a simple base.

For more ideas on “ingredients”, check out our head-to-head comparing the legendary VOO to VTI.